The London Marathon will be hitting our screens on Sunday 28 April. Just as the training starts to get serious, Fairfield Matters caught up with two residents who will be taking on the challenge. 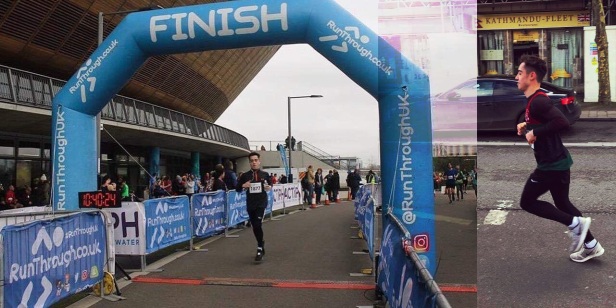 JOSH KINGSLAND IS RUNNING IN SUPPORT OF SCOPE

Aged just 19, Josh is the youngest Fairfield resident we know about to attempt to run London. He told us:

“I’ve been running now for about five years but only started competing in long distance running last year in a half marathon in Windsor. Since that experience, I thought as it was something I enjoyed and had the potential to raise money for a good cause I made it a goal of mine to complete the London Marathon for charity.

“I was overjoyed to be accepted by Scope. This charity is a really good cause. It costs around £500 extra a week in living costs if you are disabled and many people in that situation suffer with loneliness, anxiety and depression. Through the charity they are offered a helpline.

“Training has consisted of many runs in the long hard winter and two more half marathons on the way. I look forward to being in London on the 28th of April and running for the cause.”

Cat (Catherine) Marshall lives on Fairfield Park with her husband and four young daughters. She is running to raise money for Child Bereavement UK in memory of her sister-in-law, Sandra, who died unexpectedly in June last year. She told us:

“Sandra’s passing at 47 was so unexpected and totally floored our whole family. She was a single Mum to 13-year-old Harry and the most outgoing and vivacious character that everyone loved spending time with. As a family, none of us had experienced bereavement like this before and it quickly became apparent to me that the effect it has on whole families, in such different ways, is huge. Harry has lost his Mummy and my in-laws their daughter, my husband has lost his sister and only sibling and my four little girls their Aunty. It was such a devastating time for us all.

“I had applied for a place in the London Marathon before Sandra passed away and one of the charities that I had expressed an interest in at that time was Child Bereavement UK. I couldn’t believe it when an application form arrived through the post not long after Sandra had passed away. It felt like fate and I couldn’t possibly not apply. Lizzee at Child Bereavement phoned me a couple of weeks later to tell me they would love me to join their team.  They are an incredible charity that support parents and children and all family members in different ways during bereavement. They also provide vital training for professionals, schools and employees.

“I enjoy running a bit with friends here and there, but I never envisaged that one day I would actually get the chance to do the marathon. My training program began properly in January and has been really tough! I reached the 10 mile mark comfortably and then my right knee and left hip collapsed out of the blue. I was devastated! My training was on strict hold for four weeks throughout the whole of February to give my injuries a chance to heal, if they could.  After a lot of patience (and a lot of tears) I am back in the race, albeit several weeks behind where I should be. I am determined not to give up and am trying to balance training as hard as possible to catch up with keeping my knee and hip in check so I can get to the start line on 28th April.”

If you would like to sponsor Cat or make a donation to Child Bereavement UK please visit her fundraising page.

This site uses Akismet to reduce spam. Learn how your comment data is processed.

vendors in the urban park